The rain came down hard, right when I was about to leave my day job for the gym. There was a new exercise class that I wanted to try, after not feeling well enough last Monday. It meant that I had to miss the class I was hoping to try out; the other choice was risking the rain and rushing out of there. (Don’t worry, I made it this Monday.)

In Miami, rain means nothing. You can get drenching downpours for a few hours or a sprinkle of rain for a few minutes, and sometimes a combination of the two. But when trees came down and we lost power in the office, I knew that risking traffic and floods in the road was not worth my brain yelling at me for missing the previous day.

Plan B was to try out an exercise video, Fun House Fitness, from my childhood that you couldn’t find online. It had two versions, a real kiddie version and one meant for older teens. The hairstyles screamed the 1980s and 90s, with how floofy it was, and how everyone seemed to get covered in latex slime. I didn’t even know what the show it was based off involved. We all would have been too young, and my older brother wanted to do the Carmen Sandiego game show on PBS. He would have steamrolled the competition and caught Carmen. 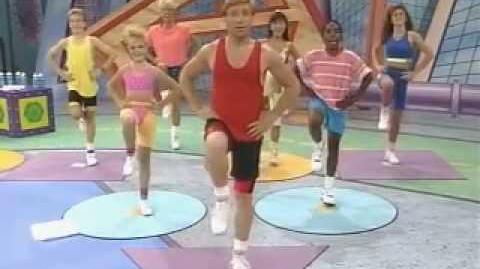 As the rain poured, I put the DVD into my desktop, prayed, and it worked. The video came on, of kids who were probably adults by now doing stretches and dance moves. Funk had probably gone the way of disco, but man the dancing and seeing the footage from the game show was fun. Soon I started moving along and keeping to the beat as best as possible. The whole video was about 45 minutes. I felt better about my balance, after falling over in yoga several times over.

Doing kids’ workouts is different from adult workouts. You feel some relief that your body isn’t screaming in the middle for you to press the pause button. Also, your ego takes a bruise on realizing that these kids on the screen have mastered the forms better than you ever can. The two even out, though with kids’ entertainment you get a higher sense of fun and a lesser sensation that exercise is work.

Kids’ workouts also lack some dignity, to an extent. If you are going to perform dance moves and stretches, and mime climbing or running in place, then you have to be prepared to look ridiculous. Also keep in mind the silly videos that are put in between the actual workout, at least for Fun House Funk. To me, seeing kids covered in slime or peanut butter for challenges kinda grosses me out and fascinates me at the same time. To avoid any allergy issues these days, a game show would probably need to screen for health and make sure people can breathe through the mess.

With that said, it’s good to know the DVD works. I felt better dancing along to kids who can bust a move and show more flexibility than I ever can. And it’s good for when I can’t make it to my regular cardio kickboxing or yoga due to extenuating circumstances. Mind, I hope I can find adult exercise videos that retain that sense of fun.